In conversation with Dr Robert Biswas-Diener

Previous Next
In conversation with Dr Robert Biswas-Diener

Dr Robert Biswas-Diener is widely acknowledged as an authority on the application of positive psychology in coaching; he has published over 60 academic articles and is the author of seven books and counting.

Our online learning community recently had the privilege of catching up with him, and it was no surprise to find him equally humble, insightful, and thought-provoking.

During his introduction to the group, Sue asked Robert what he thinks is important for people to know about him? His candid reply sheds light on his inquisitive approach to Positive Psychology:

“I’m an artist stuck in the body of a psychologist….”

He shared how he celebrates his intellectual freedom to pursue topics that interest him in a series of Positive Psychology “side hustles”. Despite his brilliant career to date, he referred to himself as “a research hobbyist” without a formal academic affiliation. Perhaps the playful resistance to label or pigeonhole his areas of expertise is reflective of his perspective on the study of Positive Psychology as a whole.

“In Positive Psychology, I have always lamented the fact that people rush to closure…”

After all, Robert has been named the ‘Indiana Jones of Positive Psychology’ and has researched happiness and other positive psychology topics with groups such as the Amish, the Inuit, and the Maasai. His research has taken him to far-flung places such as Greenland, India, Kenya and Israel.  Evidently, inquiry into cross-cultural views is a reoccurring theme in Robert’s work.

Reflecting on the recent IPPA world congress, Robert shared some of his highlights from this virtual event.

He discussed how the usual predictable themes of positive psychology can often lead to a discussion of predictable interventions and how this year’s conference marked a real turning point. With a nod to the Black Lives Matter movement and the Pandemic, Robert applauded a greater emphasis on appreciating diversity of voices. He welcomed that we are thinking about more culturally sensitive measurements in positive psychology and looking more closely at how themes might manifest across cultures. He remarked that historically there has been a real tendency for people to treat journal publications as if they are scripture and that more nuance is necessary.

“We are starting to create room to ask questions surrounding culture…”

As the conversation flowed on, Sue asked Robert to share some of his thoughts on hospitality, one of his more recent areas of research. Although hospitality is a valued social and cultural phenomenon, Robert believes it has been largely overlooked in the psychology research literature.

He observes hospitality as an attitude of welcome, commenting that with the rise of xenophobia and authoritarian governments, hospitality can be seen as an antidote to such issues.

“It just feels like hospitality, to me, is the antidote to so much.”

As part of his exploration, Robert has interviewed people from different cultures about what hospitality looks like to them. The mentality of inviting others to share your resources and space, is a wellbeing topic that fascinates him. He looks to better understand hospitality as individuals and how it is valued by Nations. We discussed how hospitality is seen as an honour that can elevate the status of a family in some cultures and the distinction from hospitality as an industry or service orientation in other parts of the world.

We imagine the family dinner table when Robert was growing up to be a smorgasbord of discussion. With both parents being psychologists, and his late father Dr Ed Diener – American psychologist, professor, and author – leaving behind a true legacy of richness and rigour in the positive psychology space.

When asked how he would like to see practitioners and researchers get involved in the future of Positive Psychology, Robert referenced his father’s approach to research. Robert noted that practitioners share something in common with researchers, and that is an emphasis on questions rather than answers.

“You take the published research, and you allow that to inform your questions rather than just informing your answers.”

He mentioned his 2021 article written with Todd Kashdan; ‘Three lessons from Ed Diener’ where his father’s pioneering work on wellbeing is reflected on with focus on three central lessons. Lesson One: An emphasis on descriptive science; Lesson Two: Scientific Rigour and Lesson Three: Great Research Questions. His contributions were summarised as a template for how to do great work that improves our understanding of humanity, has real-world relevance, and stands the test of time.

“He asked big questions because he wanted to be descriptive rather than prescriptive. That is a subtle but important distinction in science.”

It seems devotion to high-quality research and asking challenging questions runs in the family. We really enjoyed an insight into how Robert spends his time. We found his enthusiasm for paradigm-shifting questions infectious and thank him for sharing. You can learn more about Dr Robert Biswas-Diener via his website.

Beyond the sneak peek we have summarised here, our extended conversation touched on how you show up as a coach, co-creation of happiness, academic diversity, culture and wellbeing, methodology in neuroscience, and more! If you would like to watch the full interview head to learnwithsue.com.au. 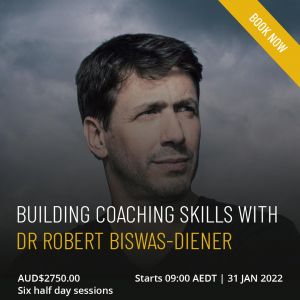 A coaching tip shared by Robert is to help people focus on solutions rather than problems. While this may seem obvious – in the situation where someone is sharing their complaint with you, it requires an artful skill to shift the conversation to a solution orientation without invalidating their current feelings. The tip – give people time to share their complaints without inviting them to do so more than they ordinarily would. Then simply state “wow that complaint sounds awful; what would you prefer instead?” This small step is a very natural way to help bring their thinking towards a solution

Interested in more coaching tips? Langley Group brings you a rare opportunity to learn the skills of coaching from the best in the business, Dr Robert Biswas-Diener. Join us for this highly experiential, 21-hour workshop commencing 12 September 2022. Enrol here.

Learn with Sue is an online membership like no other. Interact with the brightest minds in positive psychology who have dedicated years to identify the secrets of “what makes a good life” both personally and professionally. Access a library of resources, tools, and tips to help you implement the science to boost your wellbeing. For more information about a Learn with Sue membership visit Learn with Sue