Which emotional intelligence test should I use?

Previous Next
Which emotional intelligence test should I use? Emotional intelligence is a critical tool in business, underpinning people’s capacity to work well with others, manage stress and make effective decisions. What was once thought an intangible determinant of success can today be accurately measured, allowing greater predictability in key HR and talent areas as hiring, promotion, leadership and succession planning. And since emotional intelligence is changeable, these fundamental skills can be sharpened to improve individual performance and collaboration, resulting in better business outcomes.

With a diverse range of emotional intelligence measures and methodologies available–not all of them reliable or scientifically validated–how do HR and talent mangers, coaches, consultants and business leaders know which is best?

Here are some guidelines to help you choose the right emotional intelligence tool for your situation, individual and business.

Three methods are used for measuring emotional intelligence in individuals, organisations and teams.

An ability or performance-based test delivers the most accurate results. Feedback from managers, peers and direct reports (a 360 degree process) elicits valuable information from an observer perspective to give individuals, their coaches and managers a comprehensive overview of emotional intelligence, including the person’s strengths, blindspots and development opportunities. They can also be useful for benchmarking observable performance. Bias can be a factor in both 360 and self reports. Self reports can be useful to develop self-awareness, especially when compared to 360 data, though cannot be relied on as an reliable measure as people’s subjective assessment of their skills is often inaccurate.

Emotional Intelligence tests vary in terms of the capacities they target and measure. Some purely measure emotional intelligence such as the ability to recognise and manage emotions in themselves and others, while others encompass a range of allied skills such as resilience and decision-making. They can be categorised in four ways based on the capacity they measure: ability, trait, competency or behaviour.

The four main research-backed emotional intelligence tests fall into these four categories. These are: 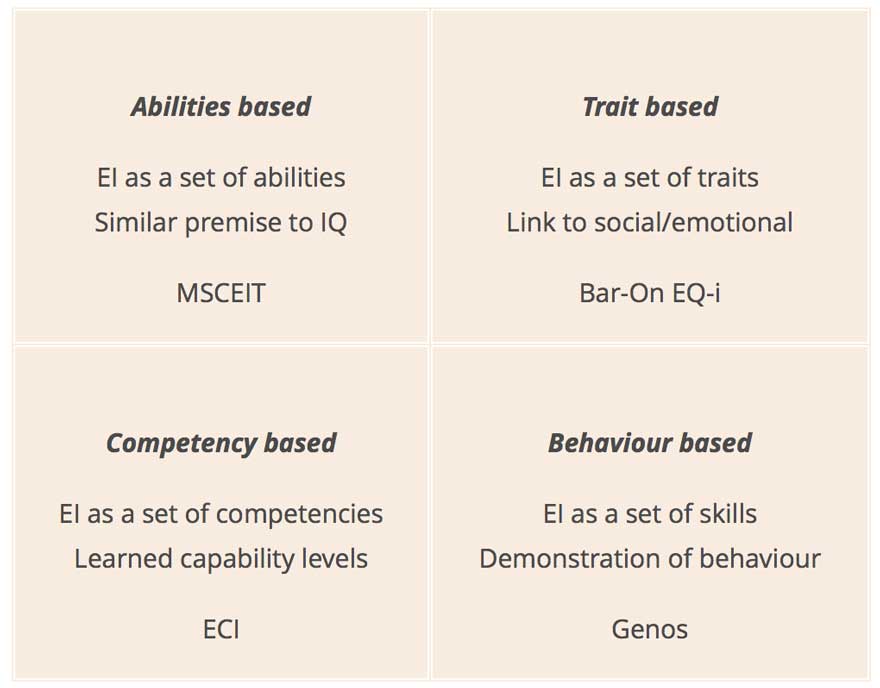 An abilities-based emotional intelligence test assess actual emotional ability in the same way an IQ test measures cognitive ability. Where an IQ test asks you to wrangle with cognitive problems, this test asks you to solve emotional problems. It doesn’t at any point ask your opinion or perception of yourself or others. Developed by Peter Salovey, Jack Mayer and David Caruso, originators in the field of emotional intelligence, the Mayer-Salovey-Caruso Emotional Intelligence Test (MSCEIT) is the original and only EI ability-based measure. The MSCEIT test is recommended for recruitment, selection or any situation where you want an accurate and objective assessment of emotional intelligence. It is ideal for situations where people may want to create a positive impression or ‘fake good’ and challenges them with information about themselves they rarely get from other sources.

These assessments assume emotional intelligence is a trait akin to personality or disposition, a more stable and consistent measure than behaviour. Trait-based EI testing locates a person on a continuum, similarly to the way personality traits of extraversion/introversion are defined. The Emotional Quotient Inventory (EQ-i, EQ-i 2.0 and EQ360), based on the Bar-On model of emotional intelligence, is the most widely used and reliable trait-based EI test. It measures both emotional and social competencies for a well-rounded picture of people’s emotional intelligence and opportunities for development. The EQ-i 2.0 is geared to a business-centric audience and includes a wellbeing measure. The Trait Emotional Intelligence Questionnaire (TEIQue) is another popular tool. Both have self- and 360 reports.

These tools measure a person’s emotional intelligence competencies against expected levels. In the workplace these represent learned capabilities and may be rated according to role. For example, a CEO will usually be expected to rate higher on EI competencies than a front-line manager. The Emotional Competency Inventory (ECI) and Emotional and Social Competency Inventory (ESCI), both based on the model developed by Daniel Goleman and Richard Boyatzis, are the most widely used competency-based measures.

These emotional intelligence tools all have have pros and cons. The key consideration is which tool will provide you with the information and outcomes you need for the individual or business. You also need to be aware what other tools are currently being used within the organisation. Ideally you don’t want to be measuring the same things with different tools as it can be confusing. Select tools that complement each other and enable people to clearly interpret and apply insights in their work and life.

For instance, if you already have a 360 feedback tool built into a leadership programme, do you want to include another? If so, consider using MSCEIT.

If you already use a leadership competency framework, would another set of capabilities confuse people? Both MSCEIT and Genos are pure EI tools that provide targeted and unique information to increase self-awareness and focus people on developing the foundational emotional intelligence skills that underpin leadership competencies.

If you are already using a trait-based tool such as Myers-Briggs Type Indicator (MBTI) across the business, don’t complicate with another trait-based tool. Consider the behaviour-based Genos to get a balance and give people clear pathways to develop their self-awareness and interpersonal skills. DiSC is a behaviour-based tool, so if this is already established, you may want to use ECI or MSCEIT.

While emotional intelligence frameworks can be taught and integrated into any development programmes, all EI assessments need to be administered and/or debriefed by a certified professional.

When EI assessment results are discussed with a coach or other qualified professional and integrated into development plans, individuals and teams can gain dramatic self-awareness and tangible strategies that can be integrated into work and daily life.

Emotional intelligence testing often produces startling information and unexpected insights not revealed by standard forms of assessment. This makes people pay attention and commit more fully to changing behaviour. Senior leaders we have worked with who rarely receive direct feedback can find their results particularly revealing and often resolve to focus far more on the people side of things after their EI is assessed. They start attending to their emotional impact at work, which allows them to get more from their team. Some leaders work hard on their emotional perception, learning the cues to emotions so they can better read reactions in meetings and negotiations. Others focus on using their emotions to facilitate cognitive tasks more effectively and expand these skills to generating positive emotions to increase performance their teams.

When individual development plans are combined with EI skills training and supported by coaching and/or on-the-job initiatives to reinforce new approaches, best results can be achieved.

At Langley Group, we often embed EI assessment into skills training and leadership development programmes, linking benefits with business and strategic objectives so that people understand how to use their emotional intelligence to make a direct impact on workplace performance. We also supply them with practical tools to continue practicing, reinforcing and measuring the impact of new skills.

However you choose to measure emotional intelligence, recruiting for and developing EI capacities such as interpersonal skills, emotional flexibility and self-awareness helps build a solid foundation for sustained performance and success.

Download your free ‘Emotional Intelligence at Work’ white paper that examines the science, practice and business impact of emotional intelligence in the workplace.