Previous Next
Sue Langley at the World Government Summit The World Government Summit is a global platform dedicated to shaping the future of governments worldwide. Each year, the Summit sets the agenda for the next generation of governments, focusing on how they can harness innovation and technology to solve universal challenges facing humanity. The Annual Gathering of the World Government Summit, held in February in Dubai, hosts over 4000 participants and invites world leaders, international organisations’ representatives, thinkers, and experts from over 150 countries. 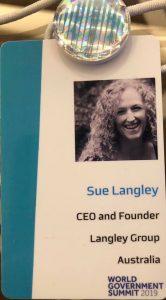 At the end of 2018, I received an email from the Happiness and Wellbeing Office in the Prime Minister’s Office of the United Arab Emirates, with a personal invitation to the Global Dialogue for Happiness at the World Government Summit. The message indicated that the Summit would bring together 500 leaders in the field of wellbeing, to discuss the role of governments in promoting and enhancing wellbeing and happiness in societies.  As a global expert I was invited to participate, which was a huge honour.

To be honest, initially, I thought maybe it was a joke, as I was simply being asked to be there.  As a global speaker, it seemed strange to be asked to attend something, without being expected to speak and share expertise.

After realising it was real, and accepting the strange notion of being paid to attend without any expectations, I was honoured to accept.  To be invited as one of 500 global experts was truly a privilege I will treasure even if I never have the opportunity to go again.

After all the logistics were organised, I found myself on a plane from London to Dubai, after spending the previous week working with clients in London.  Feeling a little nervous as I had no idea what to expect and although I had seen photos of the previous year and heard about it from other learned colleagues, I was out of the loop.  My team had arranged everything and there was no posted agenda, so I was uncertain about what to expect.

Upon arrival in Dubai I was blown away.  I was met at the gate – not through customs!  The minute I stepped off the plane there were a row of people lined up with signs for those of us attending the World Government Summit.  There were flags flying and signs around the airport, a special desk we were escorted to – after being whisked through customs of course – to arrange our transfers.  A private limousine transfer and more flags and signs in the hotel lobby upon arrival.  I was made to feel like everyone in Dubai was expecting me.  It was a wonderful welcome!

After a great night’s sleep, yet still with no idea what to expect, I got up and found myself in the lobby with several others being directed to a suite of mini-buses designed to take us to the Arena Hall venue at Madinet Jumeirah.  Bumping into Vanessa King from Action for Happiness in the UK, we travelled together taking in, and marvelling at, the experience: blue flags along the streets and hundreds of mini-buses and cars lining up to enter the hotel drop off point;  thousands of people;  getting my special registration pass, and going through security to get into the venue.  It was all overwhelming!

Initially, due to my desire to add value, I had trouble simply being present and enjoying the experience, as I felt I wanted to give something back in return for being paid to attend.  If they didn’t need me to speak and I couldn’t add value in that way, maybe I could help with the catering?!  I almost wanted to help the wait staff, just to give back and add value to the process!  After asking several people how I could contribute, I was reassured my role was told to listen, learn, offer ideas, take it all in and share it.

The event itself was amazing – over 5000 people from 170 countries.  There were senior ministers, including prime ministers from many countries, high-level officials, leading business leaders, leading researchers and some of the greatest minds (including Nobel prize winners), and even a Hollywood star.  I have never been to such a diverse event that included everyone from Harrison Ford talking about climate change, to Tony Robbins (doing what Tony Robbins does), to the Pope exploring world happiness, to Imran Khan – former international cricket star and current Prime Minister of Pakistan, Arianna Huffington, Joseph Gordon-Levitt, Steven Pinker (who I love), the Crown Prince of Dubai, High Highness Sheikh Hamdan Bin Mohammed Bin Rashid Al and of course the wonderful Minister of State for Happiness and Wellbeing Her Excellency Ohood AlRoumi.

The presentations covered everything from cutting edge technology and artificial intelligence, and how it will change the way we work and live, through to personalised medicine and driverless public transport.

One presentation I found particularly interesting was from Harald Schmidt, who predicted the end of pharmaceutical companies in the next 10 years, due to the focus on microbiome testing and personalised medicine, which is leading to health coaches creating individualised health plans. This was of interest to me after studying this topic in Venice last year

Another fascinating, and potentially a little scary topic, was the amazing things we can do with technology now that allow us to plot individual happiness.  The presentation titled ‘Mappiness’ showed a map of individual happiness in London, and the colours on the map accurately reflected a map of London, because people were happier when they were in the parks, giving the parks lots of yellow and orange blobs, and the offices and city blocks were more black, as people in them were less happy!  It was amazing! 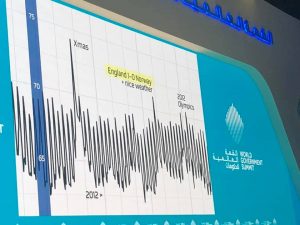 The information garnered in these studies was incredible.  For instance, in 2012, the least happy day for people in the UK was the day Donald Trump got elected, and the second happiest day in the UK that year, was the day England beat Norway in the World Cup! The happiest day, believe it or not, was Christmas Day.   The even more amazing data shared was being able to plot the happiness levels of individuals and how they changed based on if their football team won or lost.  For example, if you expect your team to win and they do, your happiness levels increase by about six points.  If they win and you didn’t expect them to, it goes up by 10 points!!!  The fact that technology can analyse where you are, if you are at a football match, who your team is, and whether they win or lose in a matter of seconds, is stunning!

My biggest area of focus during the summit was the launch of the World Happiness Report.  The World Happiness report is an annual report from the United Nations Sustainable Development Solutions Network and has contributions from leading figures in the positive psychology space, including Martin Seligman, Jeffrey Sachs, Robert Biswas-Diener, John Helliwell, and Richard Layard amongst others.

The purpose of the report is to bring together articles and best practice in many areas, such as education, health care, policy, social factors, diversity, wellbeing, environment, government, and politics.  There were several sessions during the Summit that explored key aspects of the report and I am keen to have the time to review some of the best practice activities going on around the world.  We will publish a blog on this soon, yet one quote from Jeffrey Sachs that resonated was “societies are getting richer, yet we need to focus on social ties, honesty of government, care and human values.”

It made me even more determined to continue to spread positive ripples around the world.  I want to make an even bigger difference.  I wish more of these fabulous, influential, people could complete our Diploma of Positive Psychology and Wellbeing.  As one of our Diploma alumni Emilly says towards the end of our new Diploma video – “if everyone did this course, the world would be vastly, vastly different.”  I am even more determined to make that happen and hope some of these wonderful policymakers will join us in London for our European Diploma in June! 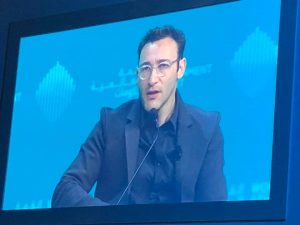 I had so many more wonderful experiences whilst at the World Government Summit: I cried at the short film done by Harrison Ford; I left after 30 minutes of Tony Robbins, whose style perhaps didn’t suit his audience; I loved hearing from such a great mind as Daniel Kahneman; I met with the Deputy Minister of Finance of New Zealand to discuss their wellbeing budget and plans; I listened intently to Simon Sinek; I loved the instant translation into multiple languages through the individual headsets that allowed me to delve into some of the amazing plans and vision that the UAE has for its citizens in the future; I loved trying to close my eyes when listening to the Pope to see how much of his Italian I could follow!

It was also fantastic sharing the event with other global leaders, who are focusing on making the world a better place.  A thank you goes to Lindsay Oades, Suzy Green, Dianne Vella-Brodrick, Mathew White, Charlie Scudamore, Vanessa King, Lesley Lyle and many more, for sharing the experience with me; plus getting an impromptu hug from Martin Seligman who remembered me from our fabulous ‘dance’ in Sydney last year, and spending a morning with Robert Biswas-Diener, who is a delight to chat to about life and the world of Positive Psychology.

All in all, the World Government Summit is a unique event that I was truly privileged to attend. It was inspiring to see so many world leaders and thinkers coming together to help overcome universal challenges facing humanity, and long may it continue.

Download this brief free report which shows that investing in wellbeing makes good strategic and financial sense based on the significant and tangible value organisations can realise by proactively enhancing workplace wellbeing. Download here.